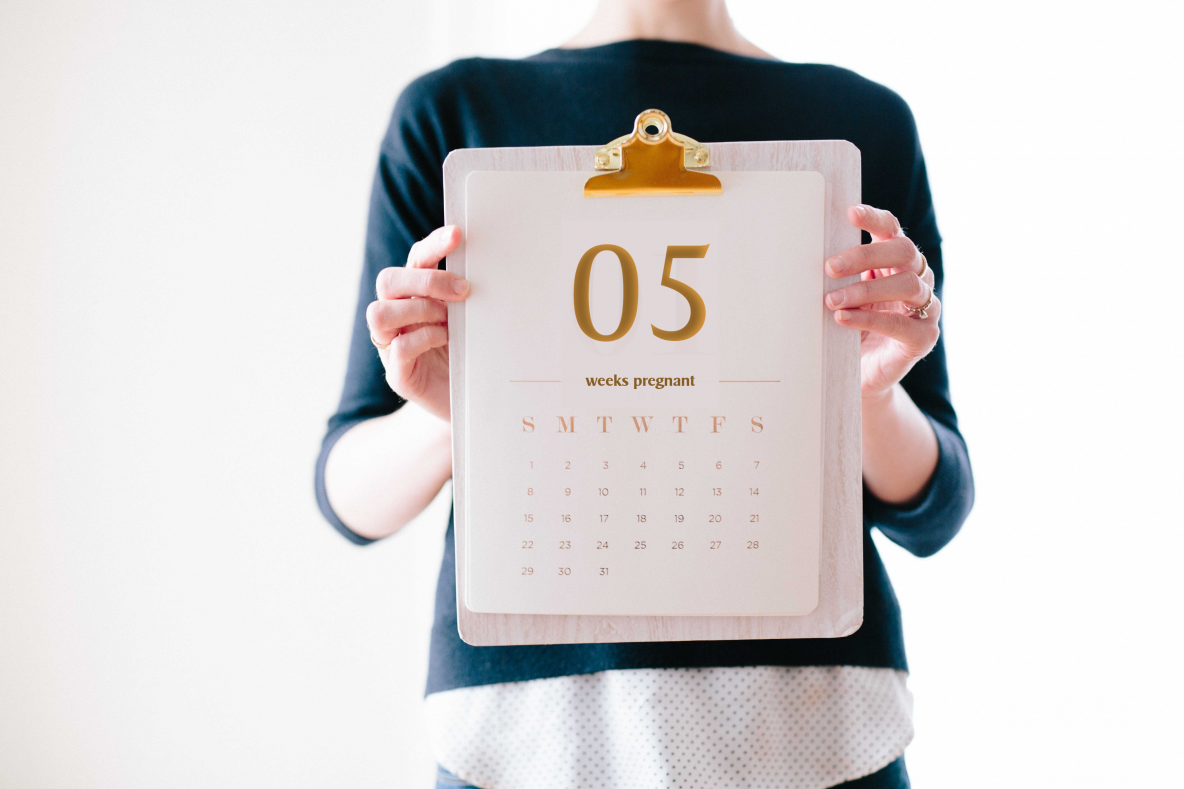 Symptoms started for me as early as week three, with emotional mood swings, breast pain, and slight nausea.

I had an OBGYN appointment for early pregnancy spotting and got to see the gestational sac on an ultrasound. This is also the week we told our daughter Poppy the news because the pregnancy was changing my behavior as I was more tired. She was noticing and we felt it appropriate to tell her.

Here is my recap of week 5 of my pregnancy.

You can find other weeks here.

These weekly updates go over each symptom in order of severity or impact.

This symptom didn’t ramp up until the following week, but I certainly felt some low-level nausea throughout the day intermittently.

At week 5 my nausea happened mainly when I was hungry, which was usually in the morning. Hello, morning sickness!

No throwing up though. I made some paleo banana muffins (this recipe) and would eat half of one when I felt nauseous.

Still going strong, I’ve had hormonal headaches since the week I found out I was pregnant (week 3). They’ve been ramping up, and while previously I really only had them for an hour or so once a day, these set in in the afternoon and stick around.

I've been trying to stay busy and keep my mind off them but had to take acetaminophen a couple of times in week 5.

WOW was I ever thirsty this week. I’ve actually been thirsty since right after I must have ovulated, at least according to my Google Search history ?

I thought it was due to impending ovulation and the timing was right around ovulation. It’s still possible the thirst is unrelated to pregnancy or at least started out that way.

I even said to Ryan that if I didn’t know that the baby wasn’t even a baby yet but a tiny little spec of dust, I would think I was showing already.

The bloating is especially bad in my midsection, but I’ve been retaining water everywhere. If I spend a lot of time standing or get especially warm, my feet bloat to the point of no return.

My dad was visiting last week and Ryan and I went on a date night to Ainsworth Hot Springs. I wore my favorite Frye leather boots, that pull on rather than zip up and I couldn’t get them back on after leaving the water!

I had to walk down the stairs in the building barefooted. Yikes.

At 5 weeks pregnant, I continued to feel sharp pains in my breasts. They were also sore and heavy-feeling.

They’ve definitely become fuller, so my bras are starting to feel a bit snug. In my last pregnancy, I went from a 32B to a 34D by 12 weeks. While I’m thankfully not there yet, I anticipate having to switch to my maternity bras soon. My breasts seem to be growing faster in this pregnancy than in the first.

I found out I had a 6cm corpus luteum cyst at my OB appointment. This likely is the culprit of some of the cramping. However, most of it is just normal stretching and pulling that comes with pregnancy.

The cramping was light and persists still even as I write this on the last day of week 6.

I had very light pink spotting that persisted throughout week five.

This wasn’t especially concerning, given that I’d spotted throughout my first couple weeks. The OBGYN appointment was especially reassuring about the spotting.

Those are the main pregnancy symptoms I experienced at 5 weeks. I was still emotional but slightly less so than previously as my hormones began to adjust.

Being pregnant the second time around is more relaxed so far. It’s interesting to experience early pregnancy without the baggage of it being the first time.