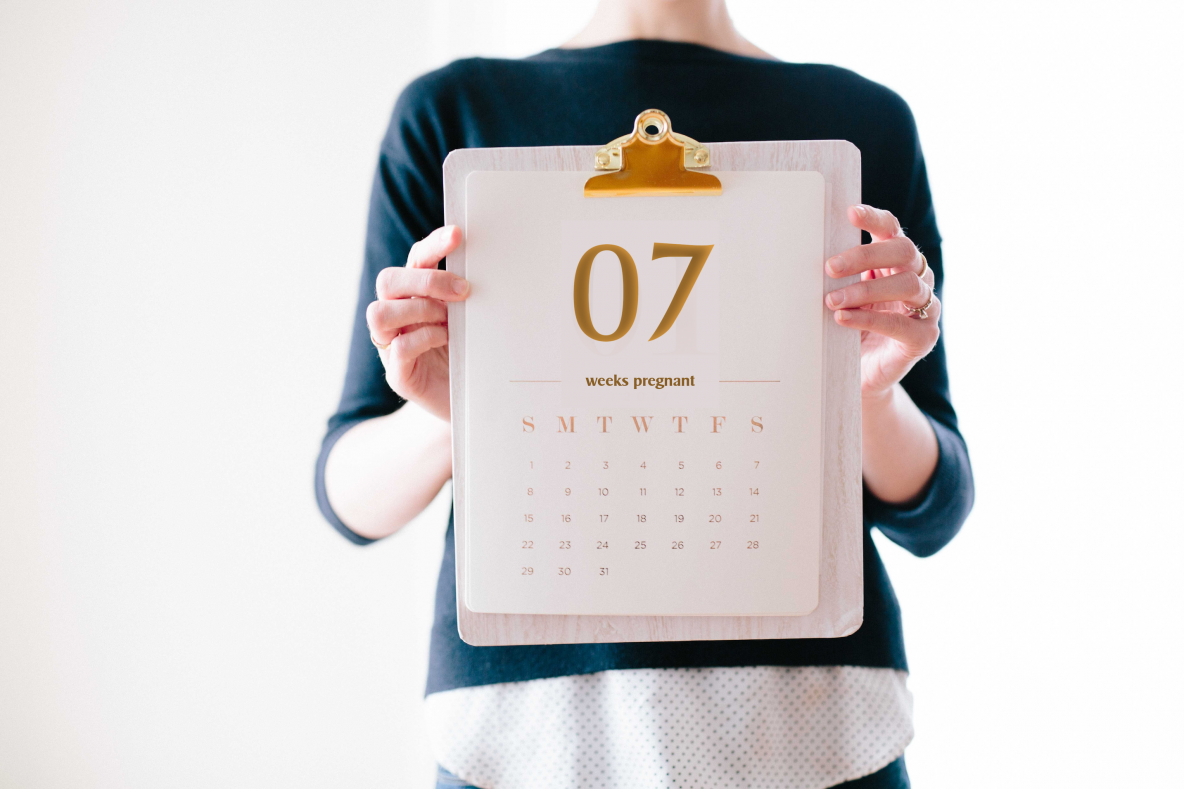 This is the week we told some of our friends that we were expecting. While we were still in the miscarriage risk danger zone, we’d seen the little bean twice on an ultrasound and the one during this week we saw a strong, healthy heartbeat.

We felt safe doing so, especially to our friends and family members who would notice something was up. It was the holidays after all, and I’m not known to pass up a glass of wine!

You can find other weeks here:

These weekly updates go over each symptom in order of severity or impact.

In week 7, I began to notice hip and lower back pain. I don’t remember feeling this sore this early when I was pregnant with Poppy and was expecting that this would be a symptom that showed up later. Unfortunately, I was wrong, and I began feeling stiff and sore like I’m much older than I am.

Apparently, this is caused by the hormone relaxin, which is at it’s most active during the first trimester of pregnancy.

This irritating symptom ramped itself up during my seventh week and one night I got up five times to pee. That plus some early pregnancy insomnia has undoubtedly contributed to exhaustion and fatigue.

Between being up several times a night to pee, plus some difficulty falling asleep with pregnancy insomnia, I was exhausted this week.

Pair sleeping poorly with the madness of the holidays and the fact that we were in Vancouver visiting family for Christmas, plus a draining week at work, and I probably needed more naps than my toddler. Not that I took any!

I know it’s not possible to show at 7 weeks pregnant because the baby is still the size of a blueberry but the bloating made me feel like I was the one turning into a blueberry, a la Violet Beauregarde.

It’s becoming more difficult to button my jeans during week 7, so I opt for dresses or looser jeans with Ryan’s sweaters. Since this is the week of a photoshoot for FLIGHTFUD and the holidays, I was hoping the bloat would subside a bit but I wasn’t so lucky.

During week 7, I was still experiencing some nausea. It wasn’t as bad as it was in week 6, but every time I was hungry I’d begin to feel sick — especially first thing in the morning if I had an empty stomach.

We did get to see our little bean on an ultrasound during this week and it was so special!

We confirmed I wasn’t having twins (which was a concern after seeing what we now know was a hematoma on my bedside ultrasound) and saw the heartbeat at 179bpm.

We also told a few close family members when we were in Vancouver in person with them, which was special.