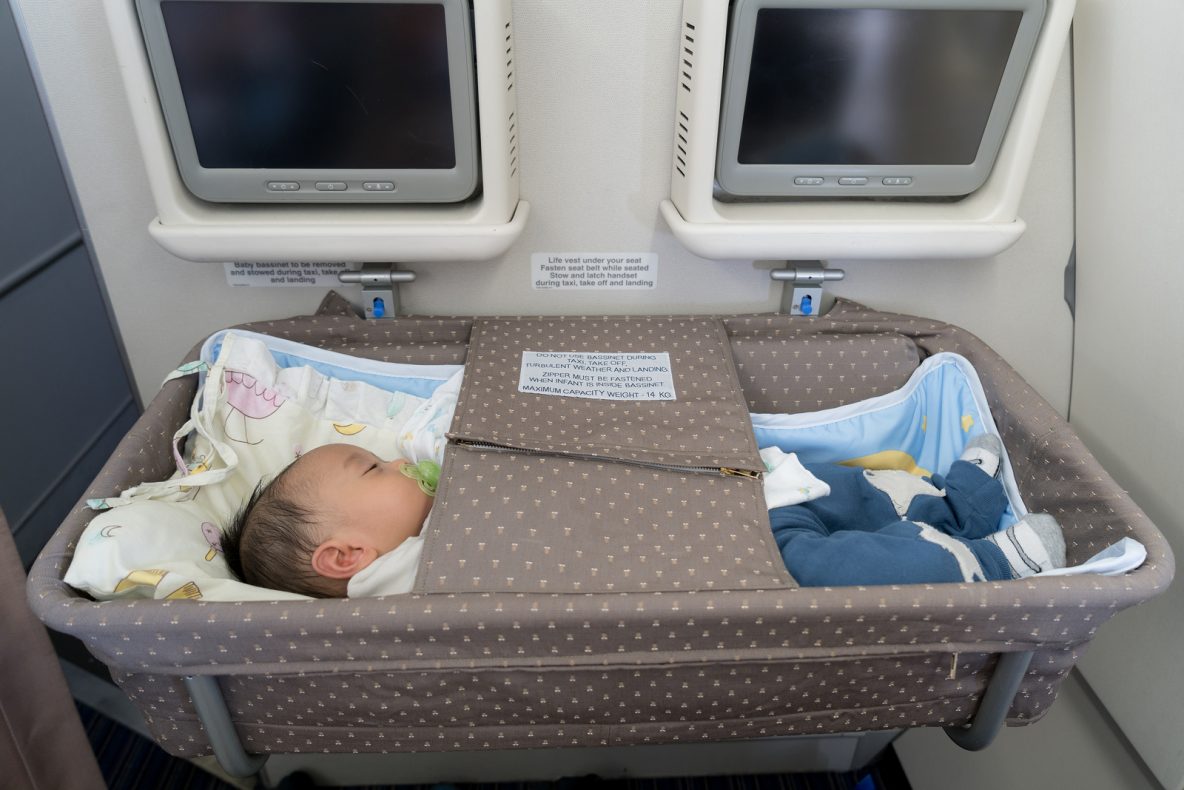 The 2021 Baby Airplane Bassinet Guide to Flying With Your Infant

Crib? Not so much.

You chose the perfect, baby-friendly vacation spot. You've checked off all the boxes on your baby packing list. You're not going to let an infant hold you back from traveling.

Everything you've prepared will set you up for maximum trip enjoyment when you land. But that leaves the flight. Where, exactly, will your little one sleep on the plane? If your baby isn’t comfortable, you’re not going to be comfortable. Miserable baby = miserable parents.

If your child is under two, airlines don’t require you to buy them their own seat (probably why you're taking off now, to begin with!). But other than your lap or sleeping in their baby carrier (especially for longer flights) is the airplane bassinet.

This little contraption is a lifesaver, because do you really want to have your baby on your lap for eight hours? Didn’t think so.

What Is An Airplane Baby Bassinet?

Think of an airplane bassinet as a mini-bed for your baby. It’s just attached to the airplane wall instead of being free-standing in your house. This allows your baby to sleep more soundly on flights, because rather airplane bassinets look and feel like a normal bassinet.

Not all planes have these bassinets, and the ones that do require you to reserve them ahead of time.

If you’re thinking of reserving one, know that they’re usually only allowed near the bulkhead of the plane. Airplane bassinets are also sometimes called skycots, baskets, or cots. Here's what they look like: 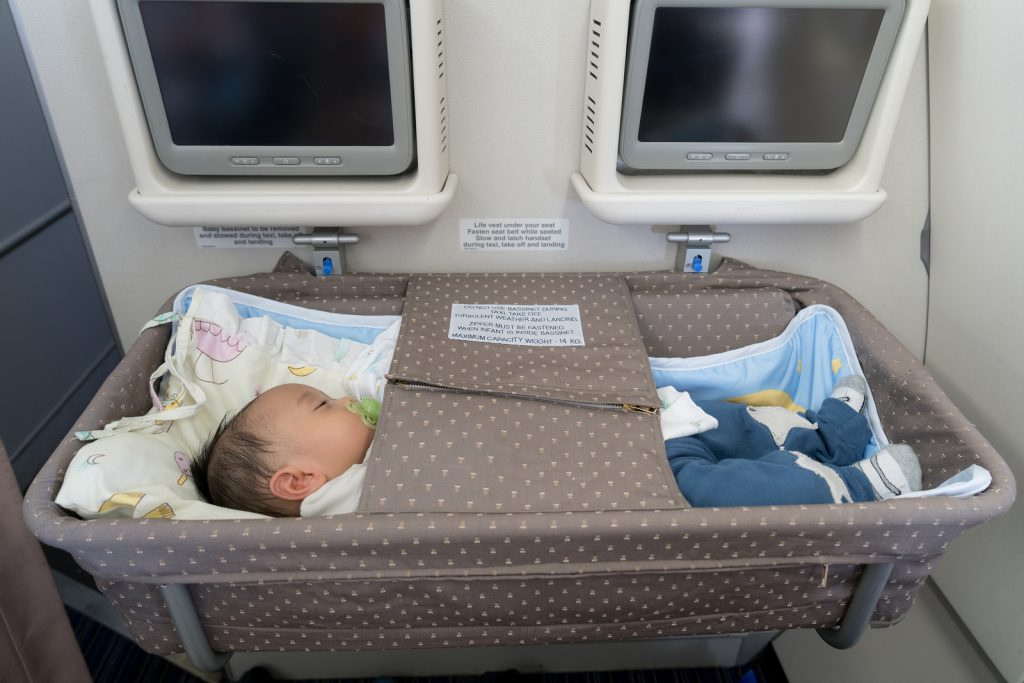 You have to wait to put your baby in the bassinet until the fasten seatbelts sign is turned off, but when you put your baby down, she can sleep soundly there until the crew starts preparing for landing or in case there’s turbulence. Then you’ll have to hold your baby on your lap.

Which Airlines Have Airplane Bassinets?

Most airlines that offer international flights offer airplane bassinets because they know these flights are longer than domestic flights. Call your airline just to be safe.

How Do You Book an Airplane Bassinet?

Once you confirm your airline offers airplane bassinets, ask what their policy is. The earlier you do this, the better because they’re a hot commodity. Many parents want them and it’s first come, first serve.

If you’re going through a travel agent to book your flight, make your request known early and always follow-up. If you’re using an online travel agent, call the airline yourself to request an airline bassinet. Follow-up a few days before your flight too, just to be safe.

How Big is an Airplane Bassinet?

This is one of those things that varies from airline to airline.

You can only use an airplane bassinet when your baby fits comfortably in it.

Most airlines cap this at six months and a weight limit of under 20 pounds. Some kids are bigger at six months old and some are smaller, so it really depends on your baby’s size, but some airlines won’t reserve it for you if your child is older than the half year mark,  no matter her size, so be forewarned.

How Much Does it Cost to Reserve an Airplane Bassinet Seat?

You can expect to pay anywhere from $45-$140 to reserve the bassinet, depending on the airline and the flight.

Very few may give it to you for free, but that’s the exception, not the rule. Here’s the tricky part…

While you may not pay more for the airplane bassinet itself, you may pay more for a bulkhead seat versus other seats. Either way, you’re still paying for the convenience of the bassinet.

Are Baby Plane Beds Worth The Money?

We're heavy travelers and took our daughter, Poppy, on several flights by the time she was a year old (some more disastrous than others). And I'm embarrassed to say that we actually had no idea that these were even a thing until the last moment.

Usually, our daughter would sleep in her baby carrier, having become used to the flight routine.

But, if your kiddo doesn't sleep well unless he's laying down, or if you don’t want to have to rearrange your baby on your lap during a long flight, then the bassinet can be worth the money.

One thing to keep in mind is that if the plane goes through turbulence, you will have to pick your baby up and hold him on your lap.

No need to remind you of this, but waking a sleeping baby is not fun, especially on a flight, so if you’re taking a flight route that is known for turbulence, and if your baby is generally ok sleeping in a carrier against you, you might want to skip the cost and hassle.

Poppy was completely fine in her carrier (we used an Ergo 360, and put up the sun shade to block the glaring lights), but the bassinet was a nice break for all of us the one time we used it.

Airplane bassinets are safe if your baby isn’t Hercules, meaning he or she can’t pull themselves up and can’t detach any safety straps. Many airlines will tell you that the safest place for your baby is in an FAA-approved car seat in his own airplane seat…

But of course, they pad their pockets with that suggestion.

In the name of safety, you’ll probably be told to put your baby’s legs towards the aisle so flight attendants can easily check on them when they walk by.

Know Before You Go…

Before you book an airline bassinet there are other things you should know.

Airline bassinets can be a comfy alternative to your lap for your baby during a long flight. If you can snag one, it could make your flight a lot smoother for everyone involved.