My Empathy Experiment: Why I Did It

Hands down the question I get asked the most often is: “Why would you ever do something like that?”

Followed by: “You’re crazy! And god, Sarah must be so insecure to make you do that”.

But two things are for sure:

So let me set the record straight on why I purposefully:

Wanna go deeper into each rule and find out my strategies for actually doing this?

Check it out here—you won’t be disappointed (coming soon).

And just so you know I actually did all this stuff, here’s some proof: 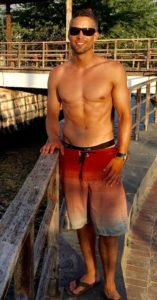 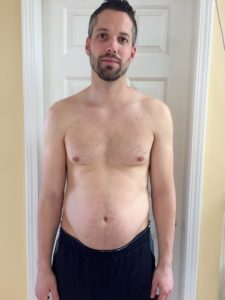 Photo Caption: The bronzed-Adonis pic was taken in the summer just weeks before I revealed to Sarah she was pregnant. And the hospital-heavyweight pic was taken one week after Poppy was born. My weight gain occurred over 7 months.

And I did all the other stuff too, promise.

Ok, so if I’m not crazy, and Sarah didn’t make me do this, what was going through my head?

To fully explain why I did this, I need to tell you a story.

So here goes… This is story of how and why, this whole thing got started.

Sarah and I were driving back from the Sea-to-Sky gondola near Squamish and we had just found out Sarah was pregnant. Actually, I was the one who confirmed it.

I looked at the pregnancy test first, and shared the results with her, since Sarah couldn’t bring herself to open the box. So she asked me to.

Photo Caption: Where I revealed the pregnancy test results to Sarah.

Obviously I was nervous too, but how cool is it for the guy tell the women she’s pregnant?

So I opened the box and choked out:

Sarah hardly believed me, and grabbed the stick.

Sarah confirmed the results and then all the things you think happened, happened: Joy, tears, fears, repeat.

Little did I know Sarah was already living out the perils of pregnancy in her mind. She was dreading:

So to try and ease her fears, I naively blurted out that I could wear a fat-suit.

Yaaaa, I know—not the best response. Sarah scoffed and jokingly said I should gain the weight and then see how I feel.

And the rest is history.

But let me admit, I wasn’t really serious about it at first, and I had no idea it would turn into a full-blown social experiment. But I followed through with it and my life has never been the same.

And just in case you’re wondering, the rest of the pregnancy rules came about organically as we realized there was a lot more going on. We simply took stock of them and they arose and added the ones we saw fit.

Why Do It To Begin With?

If you’re not with me yet, then you’re probably against me.

Or you might just be shaking your head still dazed and confused about the whole situation. Well, to understand why I did this, you need to understand how big of a deal being pregnant is (I didn’t initially).

And that’s a lot to deal with.

But don’t get me wrong. Being pregnant is beautiful, wonderful, and amazing all at the same time. But it’s also a really scary time. Moms-to-be take on a lot of responsibility and usually end up feeling super vulnerable, at least some of the time.

In other words I came to realize that:

Women’s fears about pregnancy run deep. Much deeper than I ever realized. They’re complex and intricate, snarled-up and emotionally charged. They’re real and imaginary all at the same time.

Moms-to-be worry about a lot:

And that’s just a start.

OK, so there’s a lot to worry about. But that doesn’t mean you have to do a crazy experiment, right?

It’s exactly why I needed to do this social experiment.

Why I Did The Empathy Experiment

1. To Show My Commitment

Sarah deserved my full commitment and support during pregnancy. Because pregnancy is tough and I wanted to do more than just verbally reassure her.

And that’s what I did.

I took on some of the same challenges so she’d have some physical proof of my commitment to her during pregnancy.

And no, Sarah didn’t force me to do this. Yes, she has her own insecurities like everyone, but she definitely never pressured me into it. I took this all on by choice.

Because empathy beats out sympathy any day of the week. It seems to be a deeper emotion and way more likely to lead to positive action from me (and probably most other men).

As a man, it’s especially hard to empathize with a pregnant women because we’ll never be pregnant or experience pregnancy in the same way. So all we can hope to do is sympathize. And that’s a problem because sympathy is a precarious emotion. Think about it.

It can easily be misconstrued as pity or come across as condescending if imperfectly delivered. Ever rolled your eyes while saying something nice to your partner just to appease them? Like you really didn’t believe them but you just didn’t want to hear about it anymore?

We can do it without realizing it.

And given a long enough timeframe (ahem, 9 months) it's likely to crop up when men try and sympathize over pregnancy symptoms. Because  let’s be honest, we're all human and bound to slip up. And I didn’t want to put that on Sarah (because I knew I would).

So taking on the pregnancy rules was my way of cultivating empathy and trying to avoid brushing her emotions off. Instead, they'd be mine too.

And it worked—I was a non-stop walking, talking pregnancy ambassador.

3. To Unify Our Team

Doing the experiment instantly fused our mindsets, aligned our day-to-day lifestyles, and gave us a common goal (that I was actually participating in and not just supporting from behind the scenes).

And that’s powerful, because it allowed us to share the mental burden of it all.

There’s so many extra things you need to think about when you’re pregnant:

Thinking about all of that consumes a huge amount of mental energy. And it can be exacerbated if you feel alone.

So by agreeing to “live” the pregnancy experience with her, I became part of her team. And not just a cheerleader.

It meant that I couldn’t get lazy (because I was literally feeling experiencing some of the same symptoms) and that she could rely on me just a little bit more.

So I’d be lying if I said I didn’t like crazy challenges. And that meant that the Empathy Experiment was right up my alley. Plus, it was a pretty novel idea and I’d never heard of anyone doing something like it. And that made me want to do it even more.

So for partial fear of being left out, and partially because this challenge was so unique, I decided to cozy up with all the pregnancy symptoms I could.

So let’s stop pretending that pregnancy is only women’s business. It’s not. But in most cases men leave a lot on the table for their pregnant spouse to deal with.

Women routinely single-handedly manage their entire pregnancy and postpartum care alone. We’re talking a ton of work and stress dealing with things like doctor’s appointments, food and vitamin intake, monitoring weight gain, making labour arrangements. And then dealing with everything that comes after the baby arrives: the healing process, breastfeeding, researching and buying baby gear, and postpartum depression.

I want to inspire men to become fathers and act like equally invested parents from the very beginning—from pregnancy onwards. Men can, and do play a huge role in a healthy pregnancy. But unfortunately, this mantra is not being adopted fast enough.

The Empathy Experiment became a way for me to learn about pregnancy, feminism, and gender equality. It brought me closer to something uniquely feminine and indirectly much closer to many other issues that women face everyday.

Pregnancy is fucking hard and I found that out the hard way.

I don’t regret doing it because the process taught me a lot. It taught me about pregnancy and gender equality. It helped me show my partner a new level of commitment (that she’d otherwise never see from me). And it will hopefully raise awareness and inspire others to think a little more deeply about their views and position in the world.

If you enjoyed this article, then please SHARE it (and even if you didn’t, pass it along to someone who might think otherwise).