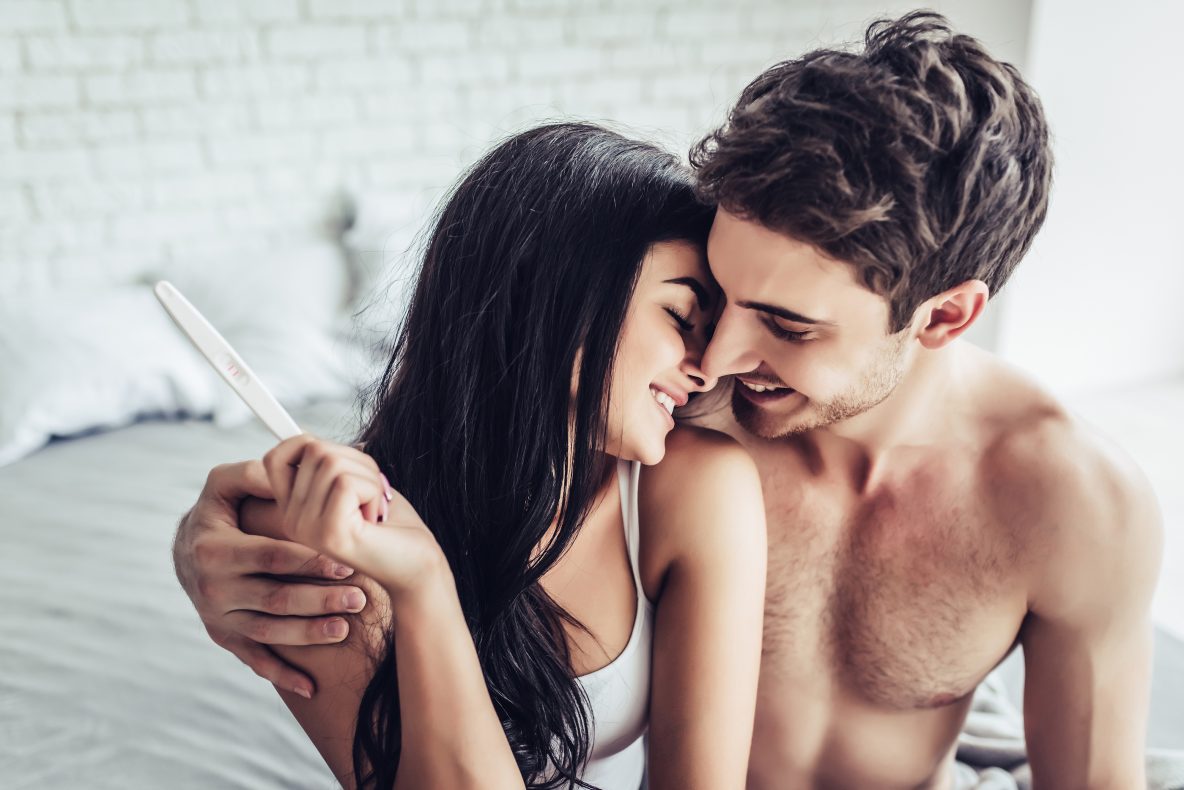 Pregnancy Mantras: 10 Things To Love About Being Pregnant

It’s easy to hate pregnancy when you look in the mirror only to see a body you don’t recognize and have little control over. A body that is morphing into something you’d rather it not — something you spent years prior to falling pregnant avoiding.

It’s easy to hate pregnancy when it keeps you up during the wee hours of the morning when everything seems to quiet and hopeless. When everything and everyone you love in the world is asleep, and you’re left with nothing but a crippling sense of self doubt, the hopelessness of a restless night, and the darkness of your own thoughts.

And it’s easy to hate pregnancy when you’re bombarded with conflicting information, much of it spread because you’re assumed to be unreliable and untrusted when it comes to making solid decisions for your own health and the health of your child, because don’t you know your body is now public property.

But these things aren’t the whole story.

And as easy as it is to hate, there’s also a certain urgency to enjoy it.

The urgency of omg-12-more-weeks until my life is turned upside down. The urgency that soon those kicks will be on the outside.

So, I needed to write this.

I needed to write this, because as I sit here, 26 weeks into my first pregnancy with heartburn caused by literally nothing except for gestation and the not-so-glamorous feeling of being simultaneously uncomfortably full and starving hungry, I’m finding it easy to wallow away the the only first pregnancy I’ll ever have.

So let’s take a minute to acknowledge the crazy beautifuls about pregnancy. Not everybody will experience the same joys as I. And some of you will enjoy much more about pregnancy.

#1: The Deep Connection It Fosters

Sitting across from Ryan over dessert one night, this wave of awe washed over me.

“Soon there will be a human in the world who we created. A combination of the two of us.”

We stared at each other with little smiles on our faces from across the table, two big slices of cheesecake between us.

Ryan and I have been deeply connected since the start of our relationship. I’d never felt a connection as instantaneous as with him. But that’s even more the case now.

We created a life. Together.

This is a first for both of us, and something that will bond us for life. This little human, half me and half him, sealed our already strong bond.

When we were cuddling in bed the other evening, Ryan asked me what I thought our baby’s personality would be like.

Thinking about this person who I knew nothing about and yet is such a huge part of me has sparked such a sense of imagination I don’t remember having since I was a kid.

There are so many unknowns about your baby when they’re still cooking – especially if you don’t buy into gender stereotypical parenting. Your child won’t be defined by the traditional roles they’re supposed to take on, so there’s an infinite number of possibilities of what that kid will be like.

And that’s really, really cool to think about.

#3: The Awareness That Your Body is Doing Something Amazing

I wish I could say I was one of those women who looked in the mirror and loved her pregnant body.

I’m not. I (literally) worked my ass off to fit into my perfect size-four pre-pregnancy jeans, and I mourn feeling strong and capable in the way I was used to feeling.

But pregnancy has brought on this other feeling of strength and capability I didn’t even know was possible. My body is doing something fucking amazing.

I’m not going to say that it’s doing what it was designed for. This makes it seem as if those who choose not to have children are not fulfilling their one-true-purpose and that’s bullshit. But I will say that it’s amazing to marvel at what it’s single handedly pulling off.

Sometimes, in the middle of the night when I can’t sleep and my baby is squirming, I become acutely aware that my body is doing something mind blowingly amazing.

#4: The Newness and Novelty

Never in my life will anybody experience something so new and novel within their own body than during their first pregnancy.

Pregnancy brings on pains that you’ve never felt before, emotions you didn’t know you were capable of, and experiences that you’ll probably never have again except in pregnancy.

It’s not just the fact of being pregnant that is new and novel, either. The second you become used to one “symptom,” another crops up.

#5: The Beauty of Working For Something

The other day, I wanted a donut so bad. I didn’t ultimately get it, but you better bet that if I had the choice of either working for it and having it later, or somebody just handing it to me, I’d take the latter.

That’s because I, like the vast majority of people living in the information era, am an instant gratification junkie.

But even despite the host of benefits instant gratification provides, there’s something so beautiful about working for something worthwhile. And I can’t think of anything more worthwhile than my baby.

It’s difficult to fully appreciate things that are just handed to us. Trust fund kids don’t see the value of a dollar, and I probably wouldn’t have fully savoured the donut as much if it were handed to me just because I wanted it.

And that’s maybe why nature doesn’t follow the stork model of baby delivery. The anticipation, the hard work your body and emotions do, and the intensity of pregnancy makes the wait worthwhile.

#6: Snuggles from the Inside

I’m at a stage in pregnancy where, when baby kicks, it feels more like a snuggle from the inside rather than a punch in the gut.

I know this will end soon and I’ll be dealing with fits in my ribs and stomping on my bladder, but it’s a beautiful feeling for now.

I’ve always been paranoid that I’d be a bad parent.

That I’d have no patience or be neglectful or just not be able to relate to my kids.

Even though I can’t say I feel bonded to the baby right now (I’m nto one of the lucky ones who feels an instant connection when she sees a positive pregnancy test), I will say that I’ve discovered so much about myself.

I’ve learned that I’m nurturing and thoughtful and intentional.

And I’ve learned that I don’t know that much about most things I assumed I knew a lot about.

One thing surprised me so much when I announced my pregnancy was just how deeply you’re loved — and, more importantly, how deeply our baby was already loved.

I”m in awe of my parents, and how much they already love the baby they’ve never even met. I’m so inspired by their excitement and generosity.

I love seeing the side of my step-dad that he shows when he plays sweet lullabies on his guitar, saying “maybe you can learn to play this for your baby”.

I love hearing my dad talk about me as a baby, and thinking about all of the ways my own daughter will differ or be similar.

And mostly, I love the deep, anxiety-quelling conversations this pregnancy has sparked with my mother. We’ve always been close, but I get the sense that we connect on a different level now that we’re both mamas.

I found out that I was carrying a daughter on election day in 2016.

I’m Canadian, but the knowledge that I was bringing a baby girl into a world where, to the majority of the population of the most powerful country in the world, an unqualified, racist, sexist man is valued more than a qualified woman shook me to my core.

And watching social media reports of the spike in sexual harassment and assault toward women just south of the border from where I lay my head at night following that election made me scared for the future.

But as I carry this perfect little being around in pregnancy, I have this overwhelming feeling of gratitude that now, at least, she’s safe.

I know that while I’m pregnant, my perfect daughter won’t have to deal with the harshness of the world. She won’t be mistreated because of her sex. She doesn’t have to face the stereotypes and discrimination that even little girls face the moment they’re born.

And if I was having a boy, I’d still be grateful that during pregnancy, for those few precious months, he was safe from “locker room talk” and judgement and stereotypes and being profiled and harassed into being somebody he’s not because of his gender.

#10: The Marvel That Is Pregnancy

I don’t know her yet.

I don’t know her yet.

This blows my mind. My daughter — the life that I’m nurturing in my own body — is a stranger to me.

How can you spend every moment with somebody, how can you grow somebody from the ground up and not even know them for nearly a year?

What I think I know about my daughter is a simple stab in the dark. I’m guessing based on her responses to stimulus that I control. Does she like Ryan’s voice, when he’s reading French books to her that we bought in Paris? When she kicks at the feeling of me tapping my belly, does she just want it to stop?